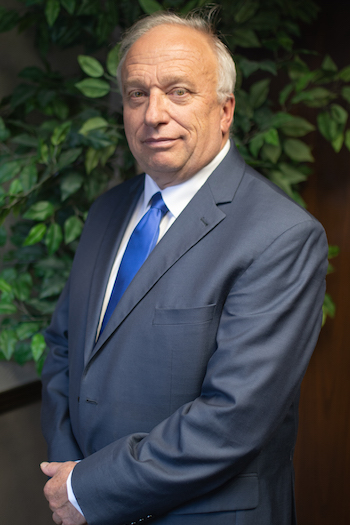 Mr. Scorsine was Vice President, Secretary, and General Counsel for 21st Century Systems Inc, a research and development technology company that focused on solutions for decision support systems to the Department of Defense.

Previously, Mr. Scorsine was a senior associate with DFI-International, serving as lead contractor/program manager on-site at U.S. Northern Command and was the subject matter expert on the law of Defense Support to Civilian Authorities. Eight years prior, he was the Plans, Operations, and Military Support Officer for the Wyoming National Guard where he was responsible for the Wyoming National Guard’s response to disasters and emergencies. He completed the Amphibious Warfare Course, the Army Command and General Staff College and the Air War College.

Mr. Scorsine is admitted to practice in Colorado, Nebraska, and Wyoming Courts, the Tenth Circuit Court of Appeals, The U.S. Army Court of Criminal Appeals, the Court of Federal Claims and the U.S. Supreme Court.

Mr. Scorsine holds a Bachelor of Science Degree, with honors, in Criminal Justice from Rochester Institute of Technology and Juris Doctor from the University of Wyoming. He also holds a Masters of Arts from the University of Sunderland in Buddhist Studies; has been a panelist and written for international conferences on Buddhist Ethics and their application to the government; and, is ordained as a Buddhist minister.

Mr. Scorsine considers engagement in the community to be an active part of his personal and professional life. We are serious when we say that Mr. Scorsine can save you in many ways. He is a volunteer firefighter and Paramedic for the SW Highway 115 Fire Protection Districts and devotes two weeks each year to volunteering as a medic at Burning Man. John is a frequent presenter at emergency medical service conferences and certified as an instructor in several disciplines. He was a member of the El Paso County Emergency Service Agency Board and is active in the Orient Land Trust, a nature conservancy in central Colorado. At home in the outdoors, he was a twenty-year veteran of the National Ski Patrol, with his emphasis on mountaineering and avalanche rescue. He has always worked with search and rescue organizations, being especially skilled in back-country and high angle rescue. Mr. Scorsine is certified as a public safety diver and holds the rank of Colonel with the Civil Air Patrol. Mr. Scorsine is involved in many other local professional organizations.